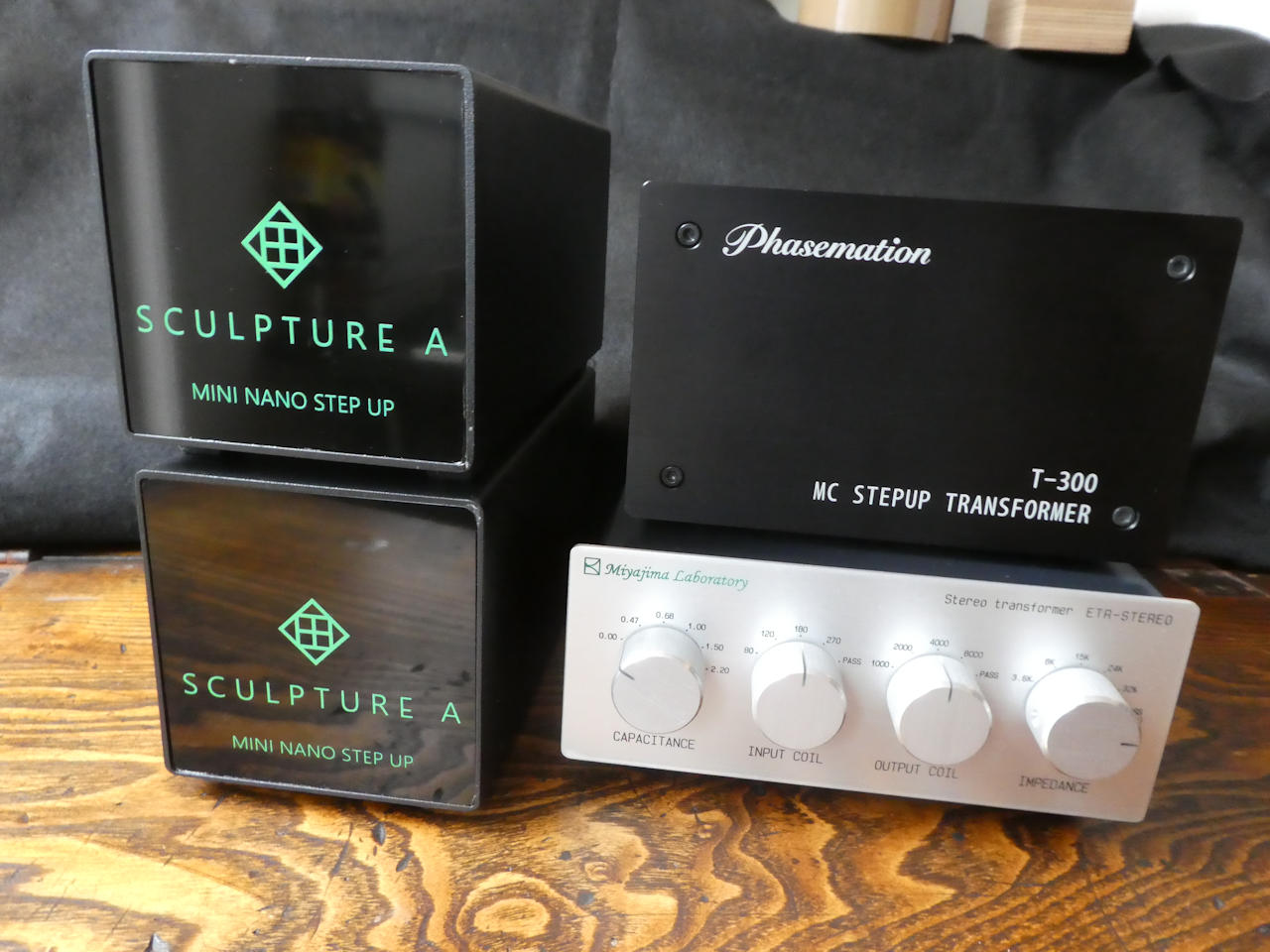 At Ammonite Audio we offer a range of step up transformers (SUTs) for both mono and stereo moving coil cartridges, from manufacturers including Ortofon, Miyajima and Phasemation, at various price points.  Recently, we were invited by François Saint-Gérand of Ana Mighty Sound in France to try out their new Mini Nano Step Up transformers from house brand Sculpture A.  This kicked off a mini-comparison of our most popular offerings.  But, before that, maybe an outline description of the SUTs that we offer might be helpful.

Starting from the lowest price point, we have two SUTs from Ortofon, and both are made by Ortofon Japan.  The Ortofon ST-M25 costs £400 and is a mono SUT designed specifically for Ortofon SPU Mono CG cartridges, which have 1.5mV output – it is only suitable for those cartridges and in our opinion is a pretty mandatory pairing if the mono CG SPUs are to be heard at their true potential.  The ST-M25 is not part of this comparison.  Next the Ortofon ST-7 is a stereo SUT with 20:1 step-up ratio, priced at £450, that is broadly suitable for most stereo moving coil cartridges, including most Ortofon SPUs.  It is a great performer at a modest price and for anyone who cannot afford to spend more, it really is rather good; however it is easily bettered by the Phasemation T-300 which costs just £100 more.  So, for this comparison we are leaving the Ortofons to one side and starting with the T-300.  Our stereo SUT offerings top out with the Miyajima ETR-STEREO which is a highly flexible, switchable device costing £2550 that can cater for almost any moving coil cartridge, with optimum impedance matching.  Miyajima also make a fixed ratio ETR-KSW SUT with a relatively high 27:1 step-up ration, and we offer that only as a special order item.  Miyajima also make a switchable mono SUT, the ETR-MONO which has switchable impedance and gain and works a treat with most MC mono cartridges except the SPU Mono CGs which need a low step-up device like the Ortofon ST-M25.  For this comparison, we are only looking at stereo SUTs.

Our stereo SUT comparisons were made using our upgraded Technics SL-1200GR turntable (linear PSU, Ammonite Audio modular machined alloy armboard) with Glanz MH-94S tonearm.  Phono stage is the Lehmann Audio Decade, and all cabling is Zavfino 1877Phono Mahone.  All listening was done via Denon AH-D7000 headphones, with a Beyerdynamic A2 headphone amplifier.  Cartridges used were the entry-level Ortofon SPU#1S (price £425), Phasemation PP-300 (price £1395), and Miyajima Shilabe (price £2775).  These cartridges have coil impedances ranging from 2 ohms to 16 ohms.   LPs used included Trentemøller ‘The Last Resort’, Arne Domnerus ‘Antiphone Blues’ and various (mostly Beethoven) classical LPs, with a bit of Weber thrown in.  The LPs were chosen not just because they are well recorded and well played, but significantly because they contain a lot of ‘ambient’ acoustic cues, and rendition of spacial information is something that does vary between SUTs.

So, what did we hear?

Phasemation T-300.  The T-300 is quite a lot heavier and chunkier than pictures might suggest, and it’s very quiet with almost inaudible hum, seemingly indifferent to positioning which is not something that all SUTs can claim.  It’s beautifully made and is as ‘plug and play’ as any 20:1 SUT available.   Unsurprisingly, the Phasemation PP-300 cartridge sounded great with the T-300 SUT and the pairing gave a great sensation of free-breathing space, in all dimensions with good tonal colour and rendition of fine details.  Moving to the Ortofon SPU#1S, which can be a tad ‘rough and ready’, we hear a significantly bigger,  bolder and more colourful sound compared to the Ortofon ST-7.  A well-partnered SPU should be a bit of a musical monster and the SPU#1S is no exception when paired with the T-300 – here is music painted with bold strokes with real musical enthusiasm and allure.  Forget sniffy notions about ‘cheap’ bonded spherical tips – put the SPU#1S on the end of a really good arm like the Glanz, and a SUT like the Phasemation T-300 will let it sing its heart out.  The Miyajima Shilabe’s 16 ohm coils really need a matched SUT and while it sounded very good through the T-300, we knew that we’d heard the Shilabe sound much better.

Miyajima ETR-STEREO.  The ETR-STEREO’s high price is a reflection of its flexibility, and particularly the ability to properly match the SUT’s primary coil impedance to the cartridge coils, as well as the unusual facility to apply capacitance up to 2uF across the SUT inputs, which can be useful to tame shrill or ‘peaky’ cartridges.  There is an ‘impedance’ control that applies secondary loading resistance, but we always prefer the sound and character of this SUT with that control set to its ‘pass’ (deactivated) setting.  On the back, there is a push button marked ‘Demagnetizer’ which simply shorts the cartridge inputs while a record is being played, and that is said to have some demagnetising effect.  With the Shilabe’s 16ohm coils, the ETR-STEREO’s input coil is set to ‘180’ and the output coil to ‘4000’ giving a step-up ratio of roughly 22:1.  Here, the Shilabe is liberated, delivering a lovely liquid, filigree detailed and musically nuanced and spacious performance with thumping bass that really worked with ‘The Last Resort’ – significantly more immersive soundstage compared to the otherwise excellent Phasemation T-300.  The ETR-STEREO maybe expensive, but it clearly shows why impedance matching, as well as step-up ratio, is important with cartridges like Miyajimas which has low output from a relatively high impedance generator.  For someone using a variety of cartridges, the ETR-STEREO’s flexibility is an undoubted boon and we even have a customer who tells us that it works just fine with an Audio Note Io1 requiring 100:1 step up ratio.

Sculpture A Mini Nano. We were sent two Sculpture A Mini Nano SUTs – one with 20:1 gain and the other with 26:1 which is optimised for Ortofon SPUs.  These SUTs are small, and neatly finished and we think they look rather classy, in an understated manner.  These SUTs are quite unusual inside in using toroidal transformer cores which are made from ‘nano crystalline’ material.  I thought that was some sort of marketing hype until I looked it up, and this stuff does exist and is known to sustain much higher magnetic flux than materials usually used in transformers.  Both these SUTs share one key attribute – near total silence – you can place them anywhere and there is no discernible hum.  The Phasemation is excellent in this respect and the Sculpture A SUTs are at least as good, if not slightly better in rejecting hum.  We started with the 20:1 Mini Nano and with the Phasemation PP-300 were greeted with the most divine, spacious, organic, colourful and vibrant sound – appreciably more involving and enjoyable compared to the Phasemation T-300 SUT which is of course cheaper!  Whatever we played, whether the Trentemoller or classical LPs, the result was the same, but we’re all still haunted by the sheer energy and body tone of Arne Domnerus’s sax on Antiphone Blues.  Switching cartridges to the Miyajima Shilabe, again we heard the same improvements compared to the T-300, but Miyajimas really do need impedance optimised primary windings and the Miyajima ETR-STEREO does let the Shilabe show its true and wonderful musical potential.  Moving on to the Ortofon SPU#1S, the 20:1 Mini Nano was immediately preferred to the already enjoyable T-300 but not ‘quite there yet’.  Switching over to the 26:1 Mini Nano was a bit of a shock – the little SPU#1S now sounded a whole lot more cultured and expensive, with even more vibrant portrayal of sounds, instruments and ‘immeasurable’ things like the acoustic space between instruments, the moments of not quite silence just before an orchestra takes a collective intake of breath as the conductor’s baton is raised – musical suspense.  This pairing is so ridiculously good and I’m full of improved respect for the £425 SPU#1S, and I cannot wait to hear the SPU Wood A through this 26:1 Mini Nano SUT!  I like these Sculpture A SUTs very much indeed, particularly since they sit, in terms of price, between the excellent Phasemation T-300 and the finely adjustable Miyajima ETR-STEREO.

In summary, this has been a fascinating comparison, with all the SUTs doing well, but for someone prepared to spend just short of £695 on a SUT, the Sculpture A Mini Nano SUTs are fantastic in every respect and true audiophile bits of gear by any standard, let alone their relatively modest price.  Even better, they are available with a wide range of standard step up ratios (1:5 / 1:10 / 1:15 / 1:20 / 1:26 / 1:30 / 1:40), and we have also asked them to build a mono SUT and a stereo SUT optimised specifically for Miyajima stereo cartridges.  We have no doubt that both will be excellent in every respect, and we look forward to having them in our shop shortly.

We use cookies only to ensure that we give you the best experience on our website and we do not collect any personal information, except where strictly necessary to fulfil purchases. If you continue to use this site we will assume that you are happy with our privacy policy.OKPrivacy Policy